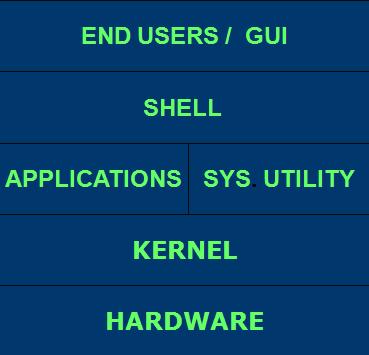 ls - Lists all the files & directories
cat - used for displaying and also creating new files.
grep - checks for the pattern in the specified file
file - gives the details of the file i.e,,, txt, exe, gif as such.
noclobber - prevents the accidental overwriting into a file .
ps - Lists all the commands that are currently running
echo - Displays all the arguments on the screen
uname - Gives the version number of the shell / kernel
who - Displays all the current users of the system
spell - Checks for all the mistakes in a given file document
pwd - Displays the current working directory
home - Displays the home directory which is decided by the administrator.
cmp - Compares two files and gives the corresponding output.
comm - Find the common text between the two files and gives the corresponding output.
pr - Paginating of files and adds an appropriate headers and footers
head - Displays top of the file
tail - Displays the bottom of the file
cut - Used to extract specific columns of the files
paste - Pastes files vertically rather than horizontally as it is usually done .
sort - Performs its usual sorting functions with variable length records,it comes with a lot of options.

Pipelines and tees
Pipeline :
* A sequence of two or more commands used with the | symbol , so that the input of one command comes from the output of the other.
* No intermediate files need to be created during the process.
* Example : $ who | wc –l
45

Tees :
* Unix provides a feature by which u can save the standard output in a file , as well as display it on the terminal
* Tees breaks up the input into two components, one component is saved in the file , and the other is connected to the standard output.
* No filtering is done by tee it gives out exactly what it takes.
* Example: $ who | tee user. lst
sunil tty1 october 1 14:32

Escaping CHARACTER BACKSLASH (\)
A backslash is used to remove the characteristics of the wild card characters .
Example1: $ echo * $ echo \*
All the files in pwd displayed *

Unix system is controlled by number of shell variables that are separately set by the system some during the booting process and some after logging.

.profile
It is a script executed during login time. it alters the operating environment of a user , which

remains in effect throughout the login session.

It is similar to that of an shell script where all the commands are inserted into single file as such and executed during login for a particular user.

Stty ( setting the terminal characteristics )
Depending upon the users choice different terminals are configured differently .
$stty –a
Speed 9600 baud ; erase=^\;quit=^d; …………………….

Features of shell (Bourne shell )
Command line editing – alter wrongly typed commands using screen editing commands (ctrl+A , ctrl+B, ctrl+E ………)
History mechanism- reissue previously entered commands.
File name completion – automatically complete a filename ,when given a partial name.
Redirecting input and output – direct output from commands to files and vice-versa.
Run commands in background while carrying on with your normal interactive work.
Change prompt – you can always change the command prompt , with the system name , present directory , date other than the usual “ $ “.
Use the { and } to produce multiple results from a single command .

Create a file with the commands which u wish to execute
Change the file access mode , executable file.
Type the name of the file to execute the commands in the script
We can also execute a shell script by giving the command
$ sh script.sh

If list is omitted, $@ is assumed Otherwise ${ list[*] } Where list is an array variable.
The keywords break, continue, and return have the same meaning as in C/C++

Positional parameters
The read command allows you to prompt for input and store it in a variable .
Correct : read name incorrect : read $name.
$1 - $9 these variables are called the positional parameters .
$# the number of positional arguments given to this invocation of the shell.
$? the exit status of the last command executed status is 0 / 1
$$ the process number of this shell
$! the process id of the last command run in the background.
$* a string containing all the arguments to the shell, starting at $1.
$@ same as above, except when quoted.
Example : festival$ cat example_5args
echo The first five command line
echo arguments are $1 $2 $3 $4 $5
Initially only nine commands are available it can be increased to any number by using the SHIFT COMMAND.

whatis - describe what a command is

whereis - locate source, binary, or man page for a program

--help - some Linux commands don’t have man pages but almost all of them support the help option.